6 Reasons Why The Open Office Should Be Eliminated


If you read the studies and the worker testimonies, there isn’t much to be said for implementing an open office environment. Employers look at it as a way to save money on office furniture and appear more progressive and fun when trying to recruit new employees, but any supposed benefits are far outweighed by the negatives. In fact, many of the advantages that were assumed to go hand-in-hand with an open office, simply turned out to be false. If anything, an open office simply exacerbates so many of the things that workers already find annoying about the workplace. There are plenty of reasons to avoid an open office environment. These are just a few of the big ones:

1. They Can Undermine Your Relationship with Employees

Employers will be quick to point out that the open office encourages collaboration and fairness, but they probably won’t want to talk about the fact that it also allows them to closely monitor employees. Without walls, it is a lot easier to see who spends their day on their cellphone or browsing social media. If you think that your employees don’t notice this extra surveillance, don’t be fooled: your workers know exactly what it going on and it is eating away at their morale.

There is a false assumption that an open office encourages greater productivity. The idea is that if people know they are being watched, they won’t give into distractions and focus more on their work. In reality, eliminating walls and privacy simply introduces more distractions in the form of noise and constant activity around workspaces. In fact, a 2013 study found that open office spaces actually lead to poorer performance. The fact the employees feel like they are being micromanaged and working under microscopes also leads to the erosion of the employee/employer relationship. Open offices ultimately experience less productivity and higher turnover.

The number one employee complaint against open offices is that they are noisy, which leads to distractions and hurts productivity. When you are struggling to meet a deadline, the clicking sound of dozens of people tapping away at their keyboards can be enough to drive you crazy. Add to that various conversations occurring on the phone, across desks and at the water cooler and you have a real cacophony of sound to try and block out.

Again and again, proponents of open office design tout the benefits of collaboration. That is the reason some of Silicon Valley’s biggest companies were the first to adopt this type of office environment. While it all started with good intentions, the pay-off hasn’t met expectations. Placing people at a large bank of standing desks may remove any literal barriers to communication and collaboration, but that doesn’t guarantee that innovation will automatically ensue.

More often than not, these workspace configurations actually cause tension among co-workers. Without walls, you are forced to sit and endure everyone’s annoying habits that are usually safely hidden behind closed doors. If you start to resent that you have to sit next to a loud talker who can’t seem to control the volume of their voice, then you are even less likely to exchange ideas and ask for input. Sometimes the less you know about your colleagues and their nail biting habits, the better it is for your work relationship.

Finally, the whole notion of promoting collaboration is often thwarted by the fact the workers in an open office often wear headphones. Listening to music or simply wearing noise cancelling devices are the only ways to block out the never-ending symphony of sounds. This actually makes people much less approachable and workers report that having to listen to music while working makes it hard to concentrate and negatively affects their productivity. 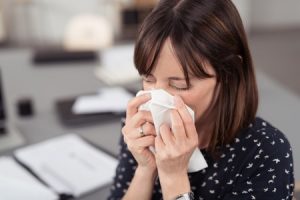 One of the most obvious drains on productivity is sick days. While it is always a good idea to encourage sick employees to stay home, once a virus starts spreading through the office, there isn’t much to be done except let it takes its course. As you might expect, an open office environment makes it a lot easier for germs to spread. You might want to invest the money you saved by not installing walls into purchasing industrial sized bottles of hand sanitizer.

Cram enough people into any space and you are bound to create a smelly environment. Whether it is the lady who wears too much perfume, the guy who likes to microwave fish or the co-worker who seems to be generating their own scent, an open office can create a real assault on your nostrils. While this might seem like a silly complaint, it is just another way that an open office environment creates distractions and makes workers uncomfortable.

6. They Tend to Pigeonhole Workers

Educators are always talking about different learning styles, but it seems that the same mode of thought never extends past the classroom to the way to think and work. The truth is that not everyone is energized and inspired by the hustle and bustle of a collaborative work environment. At least one-third of all people are introverts, which means that they think and work best under quiet conditions where they can be by themselves and really mull an idea over before discussing it with a larger group. An open office environment means that a large portion of your workforce is being forced to work under stressful conditions that will cause them to underperform.

Ideally, an office environment should provide spaces for collaboration without forcing it on workers. Making conference rooms available for meetings will allow people choose when they collaborate and give them the freedom to work on their own throughout the day. Employers might not be able to afford to provide everyone with an individual office, but even partitions can go a long way to eliminate noise and provide privacy. Ultimately, any investment in office desks and conference room furniture will produce a measurable return in productivity.

GT Racing chairs: All you need to know