It takes you through the processes of designing and building a battery-powered, Bluetooth-connected RGB lamp, using Digilent’s Analog Discovery Pro ADP3450 (which features a four channel high-resolution oscilloscope, offering 14-bit resolution at up to 0.5 GS/s, along with 16 dedicated digital channels).

It is possible, in case you;re wondering, because the company was showing a live demonstration of the build at its stand in Embedded World last month.

The key thing is a new “Linux mode”, to control the final project and debug the external circuits during the testing stage. Digilent introduces its key role as follows:

“In addition to the 12 built-in instruments enabled by WaveForms, the Analog Discovery Pro introduces Linux Mode. Linux Mode provides an on-device terminal-based operating system that, when combined with WaveForms SDK, is a flexible starting point for all kinds of custom tests and applications. Running embedded on the device itself or via WaveForms, engineers and measurement enthusiasts alike can take advantage of data streaming via ethernet, and the on-device storage to capture buffers of millions of samples.” 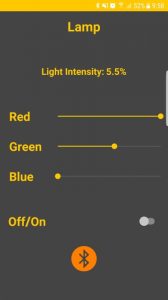 Basically, you start the script on the device, then start the application on your phone, wait until it discovers the device’s Bluetooth LE PMOD (peripheral module), then connect to it. You can then set the lamp colour and luminosity on the sliders of the application (right).

If you want to look further into it, you can read a lot more on the project page, where you can find Python scripts, some tips and tricks and documentation in Multisim Live (below), the online circuit simulator, etc. 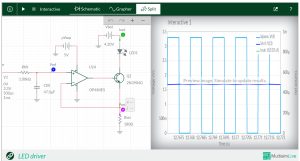 For example it takes you through the hardware setup (connecting the PMODs, building the LED Driver, and connecting the charger circuit) through to software (for example, importing modules, defining connections and constants and setting up auxiliary functions, as well as the initialisation phase).

The project is outlined here:

“The central component of the lamp is an RGB LED which should be switched on/off via an application running on a phone. Communication with the phone can be resolved using Bluetooth or Bluetooth Low Energy, but the Low Energy variant (BLE) can be easier to use in some cases, due to the custom service characteristics (more on this later). To power the lamp, a battery can be used which can be charged from the Analog Discovery Pro (the lamp can’t be directly powered from the ADP, as it doesn’t provide enough current).” 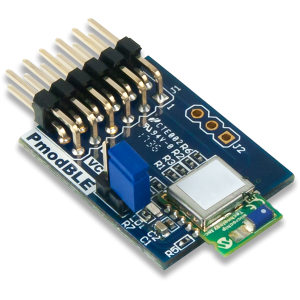 In this prototype, a 5 mm RGB LED will be used as the lamp, which is powered by an old phone battery, but the circuit can be scaled for higher power lamps if needed. Communication with the phone is resolved by the Pmod BLE (Bluetooth Low Energy, right). The Pmod ALS (below) is used to provide feedback from the lamp and to resolve automatic switching. A full inventory of the components needed is listed below.”

An obvious disclaimer: this is way above my expertise. This Gadget Master post is just a humble fingerpost for those with bigger brains who might relish such a challenge…