The brushless fan, from Pi Hut, is always on and, while it is commendably quiet, could be even quieter – especially as Raspberry Pi OS now includes an on-off control option that depends on CPU temperature.

This toggles a (nominated) GPIO pin – there is no PWM – just 5V for ‘on’ and 0V for ‘off’. The GPIO pin itself will not power a fan on its own (my fan is labelled ‘0.2A’ and actually draws just under 100mA).
BTW, as far as I can see, this output is compatible with the PWM input of a controllable 5V fan, turning it on and off appropriately. 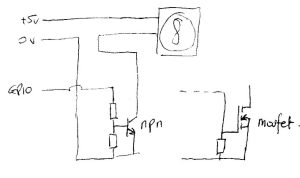 One npn transistor and a couple of resistors is all that is needed to control the existing fan from the GPIO (left).

I recommend a ZTX692B for its low saturation voltage at low base current (and one being in my bits box), but almost any npn will control 100mA.

A ‘logic-level’ mosfet would also do it (also left), and in both the npn and the mosfet cases, the hold-off resistor could be left off (if you are a monster…).

There does not appear to be any need for a fly-back protection diode to the positive rail, as the fans seem to take care of this internally – this might not be the case for a brushed fan, or even all brushless fans. 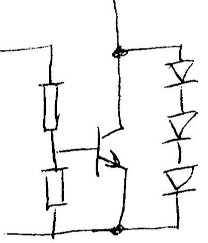 To add a little more sophistication, one, two or three diodes can be added in series (right) to run the fan continuously at a slower speed before it is boosted to full (all cased Raspberry Pi 4s seem to need some sort of steady cooling if they are not to self-throttle). The resulting fan voltages measure ~4.3, 3.6 or 2.9V respectively, and the fan current is approx half the 5V current at 2.9V – so under 1/3 the power. 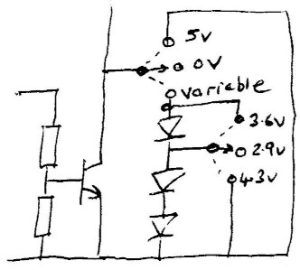 Yet-to-be-determined is which number of diodes is the ‘best’ compromise between sound level and CPU temperature at the Pi’s typical office-style workload, so the prototype is going to get a couple of single-pole double-throw centre-off switches for experimental purposes (left, voltages are across the fan) – allowing the idle state of the fan to be: ‘off’, 2.9V, 3.6V, 4.3V or ‘full-on’.

Physically, if no switching options are implemented, the whole circuit could be neatly birds-nested onto the fan wires inside the case – especially if the mosfet-with-no-resistor option is selected. 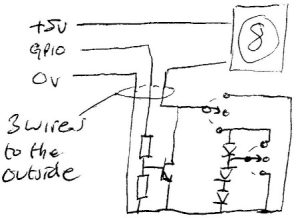 Or only three wires need to be led outside the case if a more bulky option is chosen (right).
For the switched option, note that the end terminals of the switches are wired in parallel, which eases soldering.

iOS 16 announced: Here are the biggest changes coming to iPhone this fall